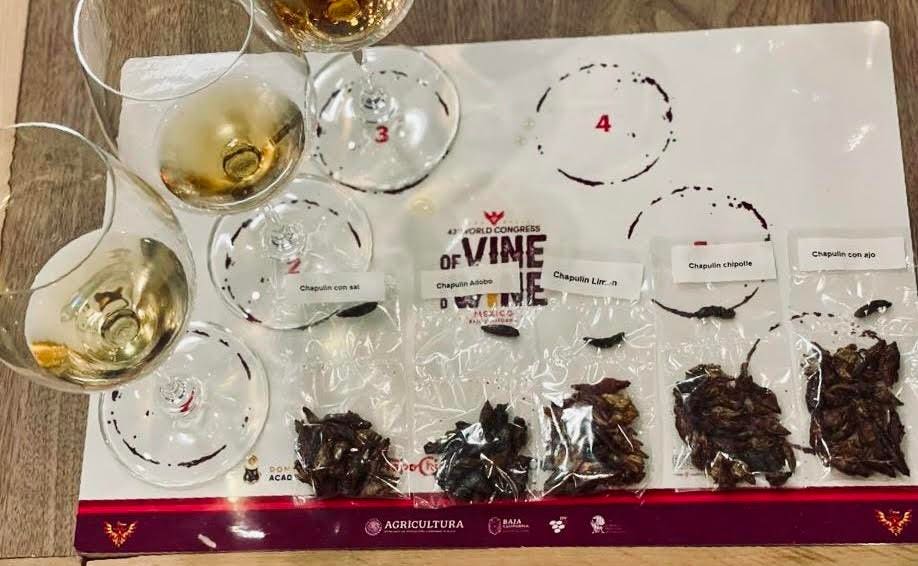 Though there are many creative wine and food pairings around the world, probably one of the most distinctive can be found in Mexico. At the recent annual OIV conference (43rd World Conference of Vine & Wine), held earlier this month in Baja, Mexico, both of the ‘Bug and Wine’ pairing seminars were completely booked.

“We had over 50 people in the Sparkling Wine with Baked Crickets session,” stated Carlota Montoya, a wine educator and media consultant from Mexico City. “We paired four different sparkling wines with five different flavors of baked crickets and asked the audience which they preferred.”

The flavors of the baked crickets included salt, lemon, chipotle, adobe and garlic. In the local dialect, according to Montoya, cricket is ‘chapulín,’ and not to be confused with grasshoppers, called ‘chapulines,’ which are also edible.

“Sparkling is super versatile,” stated Montoya. “It worked very well with the crickets. However, overall I think the Cava Segura Viudas Reserva Heredad worked best because it has a bright acidity, a persistent mousse, and is more fruit forward. The less fruity and drier styles of the other sparklings worked with the crickets, but they were not as good as the more fruity style.”

At the session, Montoya also featured fried worms with salt. “However, the fried worms did not pair as well with the sparkling wine as the crickets,” she reported. “The worms tasted better with the sherries we presented.”

Sherry and Bug Pairing in Mexico

However, for the worms, Parrodi thought the Tio Pepe Fino-Rama was the best pairing. “The worms are not as dry nor as spicy as the crickets, so the delicate yeasty aromas and flavors from a fino sherry worked better.”

But Montoya had a different opinion. “The texture of the worms is slightly squishy,” she said, “and they taste rather earthy, so the Amontillado sherry, which is a bit smoky and has a good complexity, made a nice match with the worms.” The worms were maguey worms, which are the same type that live on agave tequila plants.

Bug cuisine has been a part of Mexico’s culinary culture for hundreds of years. In addition to crickets and worms, Mexicans also eat deep fried scorpions, ants, and grasshoppers. The majority of bugs are harvested in the southern states of Pueblo, Oaxaca and Tlaxcala. The bugs are eaten alone, or added to tacos, guacamole and other dishes.

“Harvest of crickets only takes place during the months of July and December,” stated Montoya, “because that is when the crickets are eating the healthiest foods. They are the most flavorful then. It is not legal to harvest crickets at other times of the year.”

She described the process to collect and prepare the crickets. First large nets are set up on the sides of the road at dawn. Then motorcycles are driven down the road, which scares the crickets into the nets. Next they are transported to the factory where they are cooked at 300°C for 30 minutes in a large oven, and then flavored.

“The result is like eating a crispy potato chip snack,” said Montoya. “Also crickets are very healthy because they have a 1-to-1 conversion of protein.”

For the conference, the organizers asked Montoya to source some of the highest quality crickets and worms for the tasting. She travel to Oaxaca where most of the crickets are harvested and identified one of the top cricket producers as Hugo Sandoval. He was also invited to attend the OIV conference to inform the international participants about the bug cuisine and cooking methods of Mexico.

“We had so many Europeans in our session,” stated Montoya. “I was surprised at the interest, because in Mexico, eating bugs is normal for us. It is not that different from other parts of the world, such as Southeast Asia, where they have bugs as part of their cuisine.”

Camino Partners, Daniel Lubetzky’s New Investment Platform, Takes Wisdoms From KIND Snacks To Forge Individualized Paths For Young Consumer Brands
Visiting a National Park This Year? Here are the Best Places to Stay
Fresh Take: What 2023 Has In Store For The Food Industry
John R. Tyson’s Settlement With Prosecutor Kicks Off What Could Be A Rough Year For Tyson Foods
Chinese travelers are returning to Singapore, but a full recovery is not expected this year