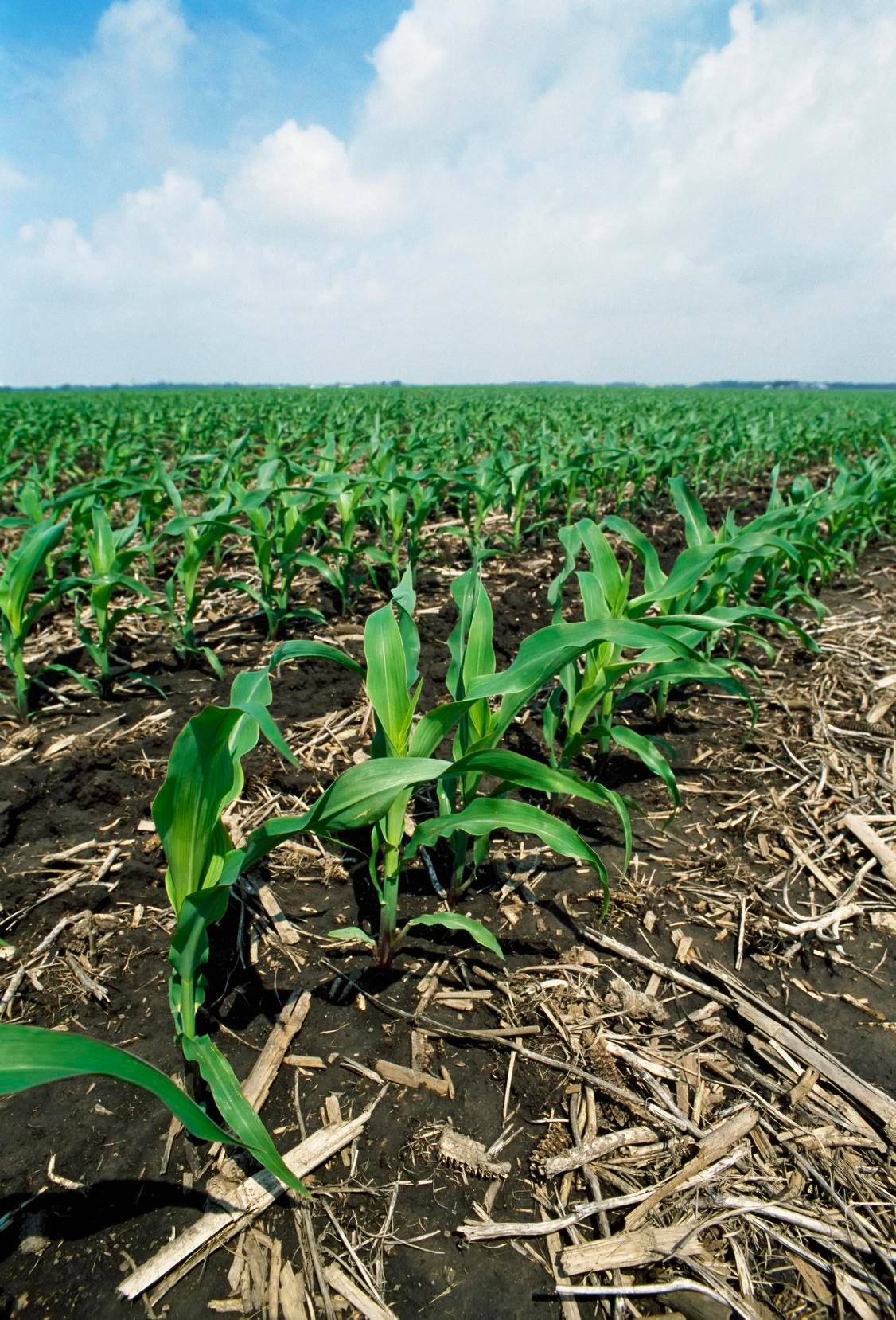 Most of the corn grown in the US has been improved using biotechnology to provide protection from insect damage and/or herbicide tolerance. The insect resistance trait has the additional benefit of reducing mycotoxin contamination of the grain, and herbicide tolerance trait has been instrumental in expanding the use of no-till farming methods which are central to growing systems that result in net carbon sequestration in agricultural soils. There is another biotech trait in corn sold under the Enogen brand by Syngenta Seeds and it was originally developed to enhance the efficiency of bioethanol production. Louis Pasteur once said: “chance favors the prepared mind,” and that phenomenon played out in the discovery that when this same type of corn is used as part of the feed for dairy and beef cattle it can reduce costs and improve the environmental profile of those production systems.

First some background on those industries. Beef and dairy products are a popular and highly nutritious part of our food supply, and the process for their production has been getting more and more efficient in recent decades. The amount of meat produced per animal has increased at about 1% per year since 1960 and is now nearly 1.7 times what it was in the 1950s. The amount of milk produced per cow has increased three-fold since the 1980s. This increased efficiency means that production of these foods now requires fewer resources per unit of food and does so with a smaller environmental footprint.

A significant part of this progress can be attributed to more sophisticated breeding programs. Much of the remaining progress has of come through optimization of the diets on which these very flexible animals can thrive. This is termed feed-use-efficiency – how many pounds of meat or milk can be generated per pound of feed. One of the major feed options for cattle is corn provided either as grain or in the form of silage made with the whole plant. Both are important options for the diets of most dairy cows. After beef cattle have been raised for much of their lives on pastureland, they are moved to feedlots for the “finishing” stage where they are also often fed with grain corn or silage. While these beef and dairy trends are very positive, there is always room for further improvement, and that is where Enogen corn fits into the system.

Enogen corn was developed using genetic engineering to add a gene for the enzyme alpha amylase which breaks down starch into its sugar components. The gene is only expressed in the endosperm of the kernels and isn’t detectable in the leaves or pollen. This is a common type of enzyme – for instance we humans secrete an amylase enzyme in our saliva and it then goes along into our digestive system to release the energy from starch containing foods such as potatoes or pasta or corn meal. The amylase in Enogen corn is a particularly robust version that remains stable and active over a wide range of conditions. It digests the corn starch into sugars that can then be used by the yeast in a biofuel fermentation to produce the ethanol. It more effectively and efficiently serves the function of added enzymes from some other source. This technology was first approved for commercial sales in 2011.

Enogen corn is “identity preserved” in the grain business because there are certain uses of corn for which breaking down the starch would be a problem. That means that all the planted fields are tracked so they can be channeled only to appropriate down-stream uses. This corn was not originally intended for use as a direct animal feed, but its safety was confirmed when this trait was going through the extensive regulatory process that is required for transgenic biotech traits.

Starting around 2013, some additional studies were done to look at whether this trait had any effects if it were to be used for feeding animals. Based on encouraging preliminary data more and more work was done with the help of animal scientists and a number of public institutions. What was found was a bit of a surprise, but in retrospect, it makes sense that cows could use some help digesting starch since that isn’t a major part of their ancestral diet. For both dairy and beef cattle there is around a 5% increase in the pounds of milk or meat that is produced per pound of feed if part of that feed is either grain or silage made with Enogen corn. Academic researchers at the University of Nebraska and Kansas State University have also documented increased “total tract digestibility” and “reduced fecal output” (e.g., less poop). A study at Pennsylvania State University with 40% Enogen-based silage in dairy feed documented a 7.2% reduction in methane emission intensity, and 5.4% greater feed-use-efficiency, but milk quality remained unchanged.

The economic and environmental significance of Enogen feed advantages was evaluated by the University of Wisconsin-Madison’s Animal and Dairy Sciences and Agronomy Departments along with Rock River Laboratory. They looked at milk content and expected revenue as well as corn silage costs. What they found was that by using Enogen corn, a dairy could save $132 to $208 per milking cow per year. Since switching to this feed source wouldn’t disrupt anything else in their operation, this is an attractive option for dairy farmers. This independent analysis also included a life cycle assessment (LCA) conducted by Sustainable Solutions Corporation, which quantified several environmental advantages. These are described below on the basis of what they would mean per year for a herd with 1000 milking cows:

· A greenhouse gas reduction of more than 1.4 million kilograms of CO2 equivalents – equivalent to taking 314 passenger vehicles off the road

A similar LCA for beef production was conducted by the University of Arkansas Resiliency Center for the effects of Enogen feed as dry rolled corn in the diet for finishing feedlot cattle. In that analysis there was a 5.8% reduction in greenhouse gas emissions, 6% lower fossil fuel consumption, 6.1% less land use and 5.6% less water use.

As of today, Syngenta estimates that there are 1.1 million cattle on Enogen-based feed, 45% of those in the beef industry and 55% in dairy. Those numbers are expected to rise with more adoption in the western US where corn from the Midwest is a significant part of the feed supply. Since there are 9.5 million dairy cows and 15 million beef cattle in the US, there is lots of potential for expansion of these benefits.

An additional advantage of Enogen corn has to do with the process of making silage. Corn can be harvested as a whole plant, chopped, compressed, and covered to facilitate a fermentation process over several months. Ensiling is a way that corn starch is made more digestible by cattle and the digestive microflora that help to convert starch to sugars, but it can take as long as 4 to 6 months for conventional corn silage to reach a sufficient level of starch digestibility that is safe to feed to cattle. What was found with Enogen corn was that the silage could be used as animal feed after a much shorter “ensiling” time and still have the same feed-efficiency advantages. That flexibility could help farmers maintain a steady feeding program throughout the year. With grain corn, the Enogen advantages are seen with simple cracked kernels, and also with “steam-flake processing” which is a more energy intensive way to increase starch digestibility that is especially popular in the Southwest and Western states, so Enogen can fit into any existing program.

Enogen corn continues to be widely used for bioethanol production, which is a significant contributor to decarbonization of the transport sector through blending for auto fuels and potentially now for use in converted diesel engines. The protein from that use of the corn crop is used in animal feed and the corn oil can be used in many ways. Fortunately, there is still plenty of corn available for food and feed uses, and with this serendipitously discovered use of the Enogen technology, that supply can go even further than before.

DOT is probing whether Southwest’s schedules were ‘unrealistic’ during holiday meltdown
Guy Fieri Is Hosting A Free Super Bowl LVII Tailgate
9 Hot Toddy Recipes For Winter
My Top Memorable Wines From Last Year Are The Wines You Should Find In 2023
Fresh Take: What 2023 Has In Store For The Food Industry