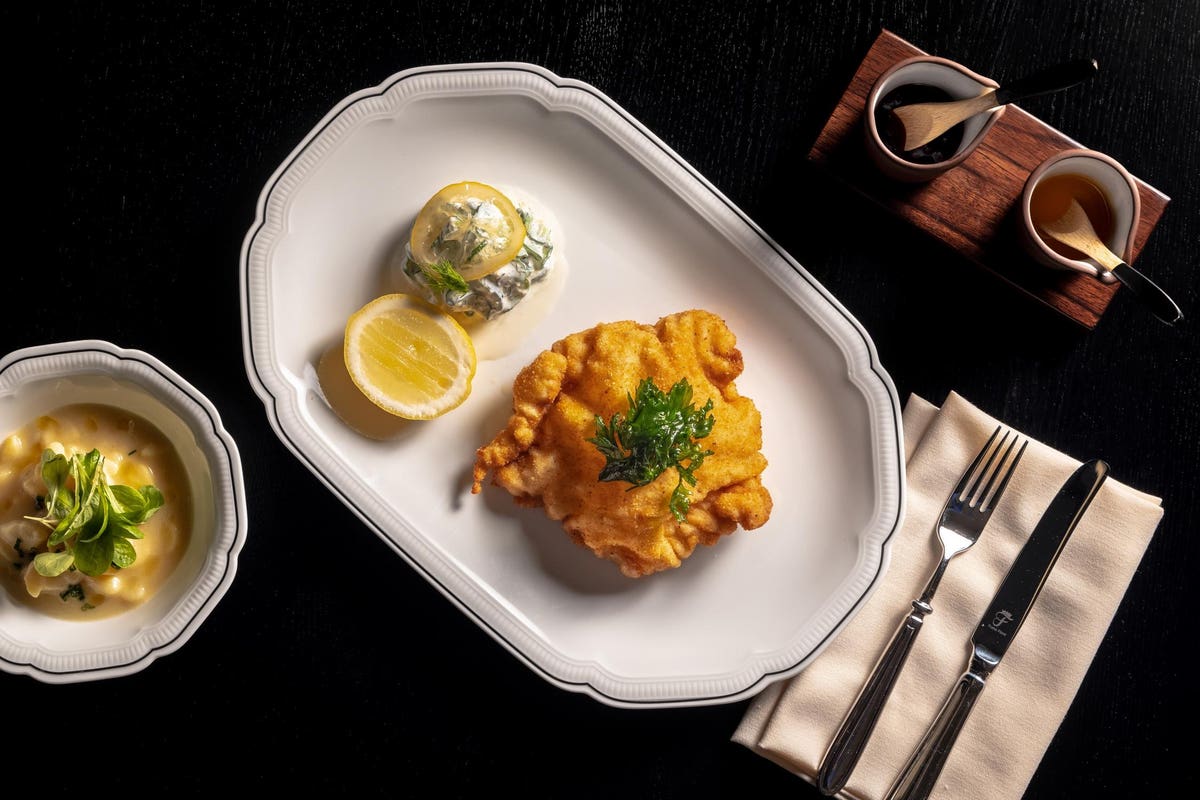 “If it’s flat, it’s Katsu!” said the chef, referring to the Japanese breaded and fried pork or chicken cutlet that recently spurred specialty comfort food eateries around the world. But I was not there for Japanese food. On my plate, a plump, golden veal schnitzel paraded proudly its Austrian roots.

Presented as a contemporary French restaurant where Austria-native chef Markus Glocker blends “Parisian creativity with Viennese tradition,” Koloman, named for Koloman Moser, the artist partly responsible for the Vienna Secession art movement, may well be serving some of the best food in New York City right now. Diners will remember the space as the Breslin in the Ace Hotel, where April Bloomfield once cooked sphere-like lamb burgers. Today, the bright bi-level space offers a stunning wallpapered patchwork of Koloman-era Viennese graphic design anchored by a monumental transparent clock behind the bar in the front room and the open kitchen towards the back.

I recently sat down with the chef to discuss his unique menu.

What kind of culinary environment did you grow up into?

I was born in a small village near the city of Linz in Northern Austria. Before she had children, my mother was a professional chef. At the time, I didn’t realize how wonderful it was, but she made everything fresh, everything from scratch: Linzer torte of course and lingonberry jam, but also a cordon bleu schnitzel with an overgrown zucchini. When she was in the mood for fish, our father went to the pond to get trout or pike!

What was your first job?

My aunt owned a traditional hotel with 60 rooms in Ternberg, in the countryside. Because she didn’t have children, we helped there on weekends and vacations, so I literally grew up in the hospitality world. When I turned 19, everyone was convinced I would take over the hotel. Instead, I went to culinary school and then left for Münich and later London.

How did you get to work at Gordon Ramsay’s three-star restaurant?

I knocked on the door of the delivery entrance and Josh Emmet, Ramsay’s right-hand man, opened the door. He agreed to give me a tryout and I ended up working at Claridge’s for a year and a half. It was 18-hours days, fourteen days straight while living an hour away by bus. Tough, but the school of a lifetime.

After the years with Charlie Trotter in Chicago, then back with Gordon Ramsay, and more recently Bâtard in New York City, what spurred you to open Koloman?

I wanted to be involved in the whole concept of a new restaurant. With EHV, the hospitality company, we have created a French/Austrian eatery rooted in French savoir-faire. Austrian cuisine is well-known, but it’s often perceived as heavy. Here we start with a heritage and apply the best techniques. I think about dishes all the time, I even jump up in the middle of the night if I suddenly have an idea.

Let’s talk about the menu?

At home on Sundays after Church, we often ate Tafelspitz, the boiled beef that’s sometimes considered to be the national dish of Austria. We never reheat the leftovers, so by dinner time, we ate it cold and jellified, similar to boeuf en gelée. I took this concept and created short rib and tafelspitz terrine, a terrine made of thin slices of braised and roast beef encased in jellied beef stock.

The lobster burger k.u.k. makes reference to the phrase kaiserlich und königlich, meaning imperial and royal, a historical nod to the time when the Habsburg monarch reigned as an emperor and a king. Here, it refers to kartoffel und kaviar, potatoes and caviar.

Roasted beets “Linzer” with a sprinkling of hazelnut crust refers to Linzer Torte, of course. And our veal schnitzel has to be made right! Cooked in clarified butter and breaded to order, it’s never refrigerated, never flattened.

The salmon en croûte turned out to be a visual flavor bomb. Instead of a pastry crust, we encased Ora King salmon and parsley-scallop mousse within thin, crispy white bread similar to the one used in tramezzini, the Italian finger sandwiches called.

On the dessert side, pastry chef Emiko Chisholm has embraced the Austrian theme and prepares apple strudel and palatschincken, but also a delicious caramelized milk bread. From the décor to the vibe to the plate, everything at Koloman is unique. But the true reason the restaurant is worth visiting, lies in just one word: delicious.

Guy Fieri Is Hosting A Free Super Bowl LVII Tailgate
The best spa hotels in Scotland for 2023
John R. Tyson’s Settlement With Prosecutor Kicks Off What Could Be A Rough Year For Tyson Foods
Penfolds Chief Winemaker Shares The Secrets Of Re-Corking
Visiting a National Park This Year? Here are the Best Places to Stay