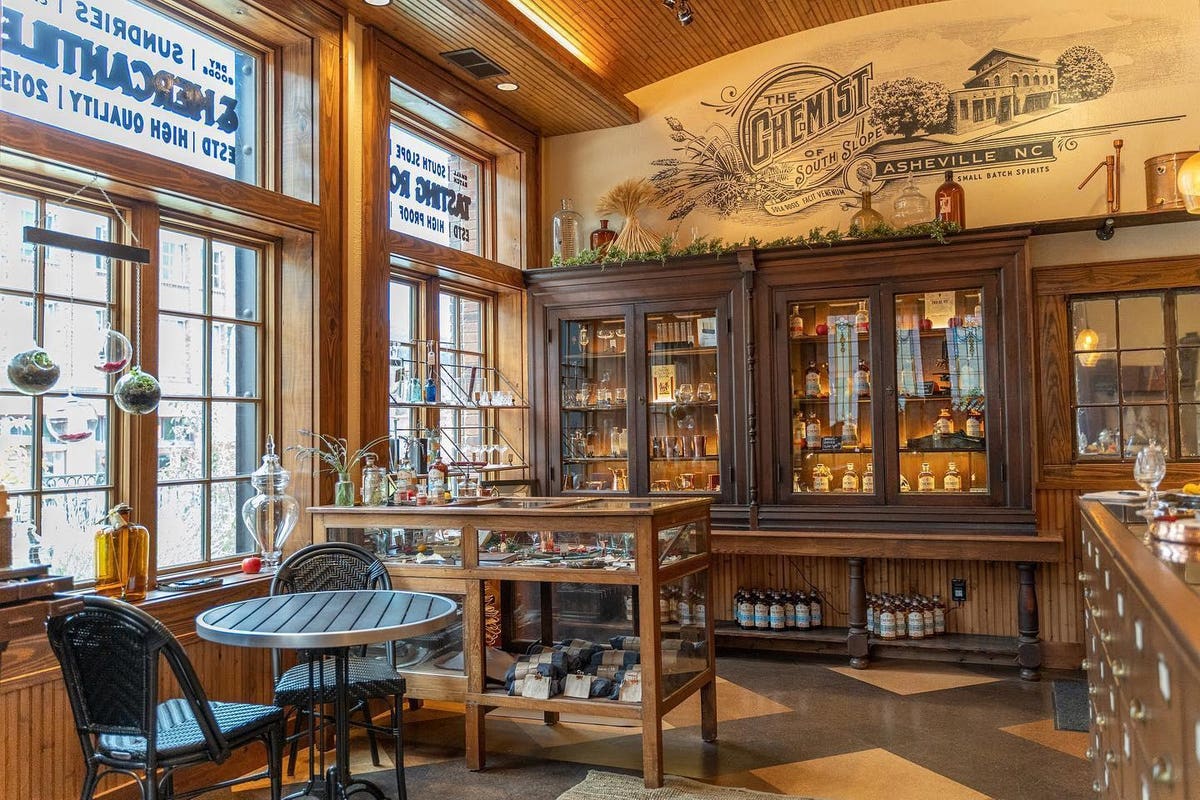 Asheville is a quaint mountain town of less than 100,000 residents. And yet it boasts the cosmopolitan credentials to rival a city ten times its size. When it comes to food and drink, it could be argued that pound-for-pound this is among the premiere destinations in the country.

Two of its eateries just collected James Beard awards in 2022—Chai Pani for Outstanding Restaurant of the year, and Cúrate Bar de Tapas for Outstanding Hospitality. It is the craft brewing capital of the Southeast, with more than 50 beer makers within its boundaries. And we haven’t even mentioned the cocktail scene yet. It’s a conversation that begins and ends with Chemist Spirits.

Founded in 2018 by locals Debbie Word and her daughter Danielle Donaldson (who is an actual chemist), the micro-distillery has quickly blossomed into a regional powerhouse of gin production. It wasn’t just by chance, success here has been the result of fastidious planning and careful execution; a thread carried through from its immaculate stillhouse and tasting room (which looks like something out of a Hans Christian Andersen fairy tale) and into its adjacent multi-story bar, Antidote, which mimics a 19th century apothecary’s shop.

“What sets Chemist apart is our attention to detail and quality, particularly in the artisanal gin category,” confirms Word. “Chemist’s focus from the beginning has been to handcraft a highly drinkable, versatile gin that is not only respected and recommended by mixologists, but also smooth and easy enough to sip on its own at home.”

Meanwhile back at home, Antidote has become Asheville’s most popular outpost for top-notch tipples. The bar staff is getting funky with the experimentation on a seasonally-inspired menu. And the loosening of North Carolina’s once-cumbersome liquor regulations is allowing them to spread their wings without limitation. And though the distillery next door is now making more liquids than ever before—including a single malt and a bierbrand—they’re perfectly willing to showcase spirits from further afield.

Highlights from the holiday list include an agave spirit-based concoction called Snake Oil, which also uses Chemist’s crowd pleasing Chocolate Orange Liqueur and a mole-infused simple syrup to create a savory and deeply complex arrangement. The Outlander is a peat-forward Penicillin riff topped with a local pilsner. It contains scotch, but not ingredient made by Chemist. Every bartender had a hand in creating at least one of the offerings on a menu that includes more than a dozen total. There are even a few low-ABV and non-alcoholic alternatives. The highlight from that particular group is the Panacea, melding Manzanilla sherry, amaro and soy sauce into soulful blast of umami.

Next door, the distillery team is busy doing more experimentation of their own, with fancy liqueurs—and laying down more single malt into barrels. But don’t let that fool you, Debbie and crew are still devoted to a gin mission above all else. She’s even winning over some whiskey drinkers along the way. “At the end of the day, I get the most satisfaction in knowing that the time and care we dedicate to our craft is converting the gin bemused into the gin enthused.”

First Asheville, next the world.

Penfolds Chief Winemaker Shares The Secrets Of Re-Corking
What’s Next For The No-Alcohol Market?
John R. Tyson’s Settlement With Prosecutor Kicks Off What Could Be A Rough Year For Tyson Foods
Guy Fieri Is Hosting A Free Super Bowl LVII Tailgate
FAA says contractor unintentionally deleted files before outage disrupted thousands of flights