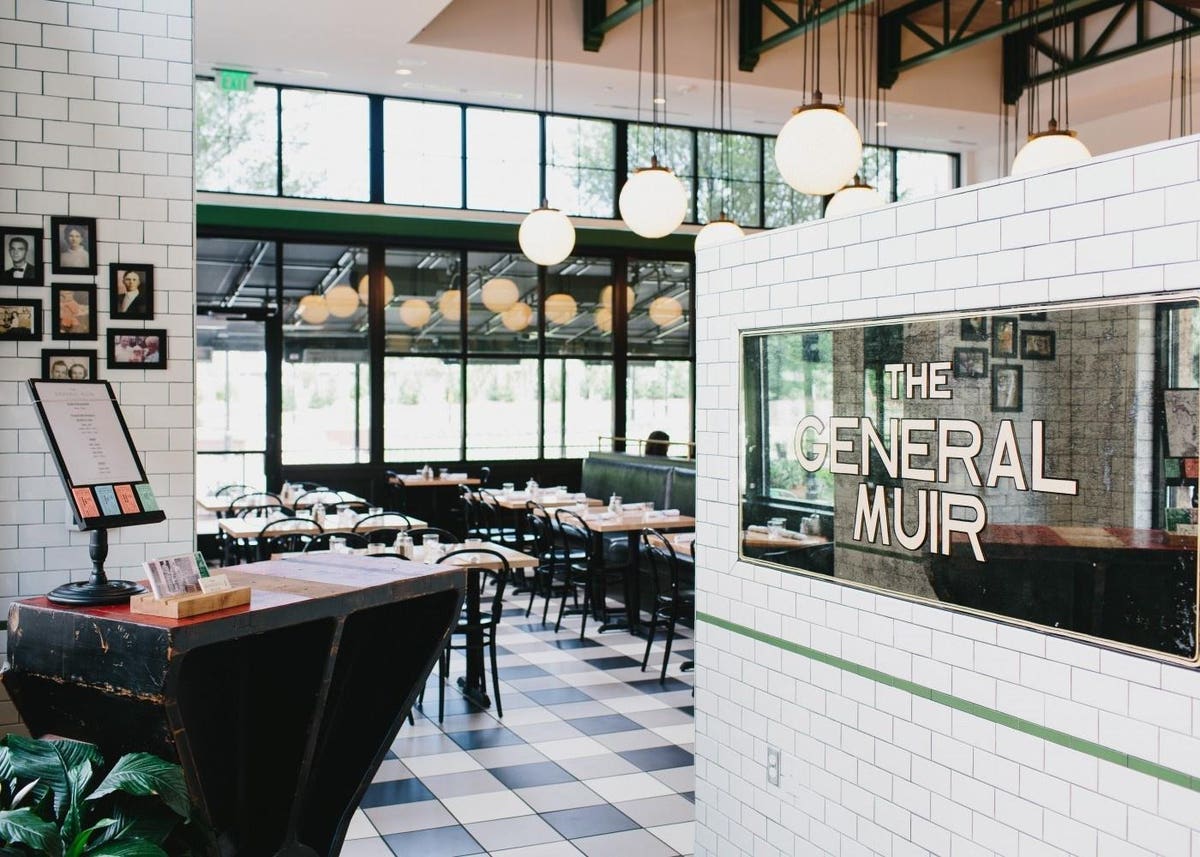 When married couple Jennifer and Ben Johnson and their partner, chef Todd Ginsberg opened The General Muir in Atlanta in 2013, they weren’t aiming to redefine the old-fashioned Jewish deli. As that N-Y Historical Society show “The Art of the Jewish Deli” demonstrated in December, the Jewish deli was fading.

As Jennifer Johnson described it, “Original deli customers were aging, dispersing, assimilating and a new generation wasn’t taking up those seats.” Many of the Jewish deli aficionados were veering away from high-calorie, overly fatty, pastrami and corned beef sandwiches.

Hence, The General Muir has a much more diversified menu than traditional deli food in order to appeal to a wider audience.

The General Muir, named in honor of the ship that Jennifer’s mom, a Holocaust survivor, took to New York City from Germany from a displaced person’s camp in 1949, specialized in “bagels and boiled pastrami made in house, and classic but creative American food at a highly-executed level” prepared by chef Ginsberg, she said.

It followed their original restaurant West Egg, which opened in 2004 in Atlanta and is still going strong, which they opened with partners Shelley Sweet and chef Andrew Smith. It is an all-day breakfast and brunch spot, which Jennifer said specialized in “Southern-inspired comfort food which includes shrimp and grits, fried chicken biscuits and tofu skillets.”

Johnson described The General Muir as an “upscale Jewish deli where you could see yourself having dinner with a beautiful bar with thoughtful cocktails.”

But opening a Jewish deli/full service-restaurant was still a risk. Johnson acknowledges that “there really was no deli scene in Atlanta, only a couple of bagel shops. I don’t know of any place that referred to itself as a deli and made its own pastrami.”

But The General Muir served gourmet coffee in the morning, full-breakfasts, and had an upscale dinner menu that include roasted duck and oxtail ragu. In addition, it offered some plant-based items for those who were health-conscious. It was indeed a Jewish deli and bagel shop, combined with being an upscale eatery.

She calls it a “sacrilegious blending of deli and appetizing with smoked meats, smoked fish, dairy meats, all together under one roof.” Their goal was to create a “welcoming neighborhood restaurant that offered classic deli items done right, which we felt was lacking in Atlanta,” she added.

Both Jennifer and Ben Johnson were attorneys who opened West Egg, without a culinary and restaurant background, thrusting themselves into their new roles. Jennifer performed a variety of tasks including “the manager, the barista, and the banana bread baker.” They financed it on “a shoestring budget of under $200,0000,” she noted, which they borrowed against the mortgage on their house.

Johnson and their partners now own several eateries including Fred’s Meat and Bread and Yalla’s, both at Krog Street Market, and Wood’s Chapel BBQ.

At The General Muir pastrami and corned beef sandwiches are still popular and constitute about 25% of their sandwich sales, but its award-winning burger outsells them. So does its Reuben corned beef sandwich, which outsells its pastrami. And who could resist the Avenue A, she says, a bagel with a schmear topped with nova, avocado and dill? Those interested in healthier fare can choose the trout salad, smoked beets, and arugula.

It attracts a wide-ranging audience, including students from Emory University and the university community since it’s located near campus. It’s also situated near the headquarters of the Centers for Disease Control and Prevention (CDC) and near several Atlanta neighborhoods including Virginia-Highland.

Since the pandemic, it has had to make adjustments. It streamlined its menu, adjusted its hours and had a difficult time recruiting enough staff.

But Johnson considers The General Muir more than a Jewish deli. “It’s a community hub for breakfast, lunch and dinner. People find community here, which improves their lives on a daily basis,” she explains. It’s a lot more than corned beef and pastrami sandwiches, in more ways than one.