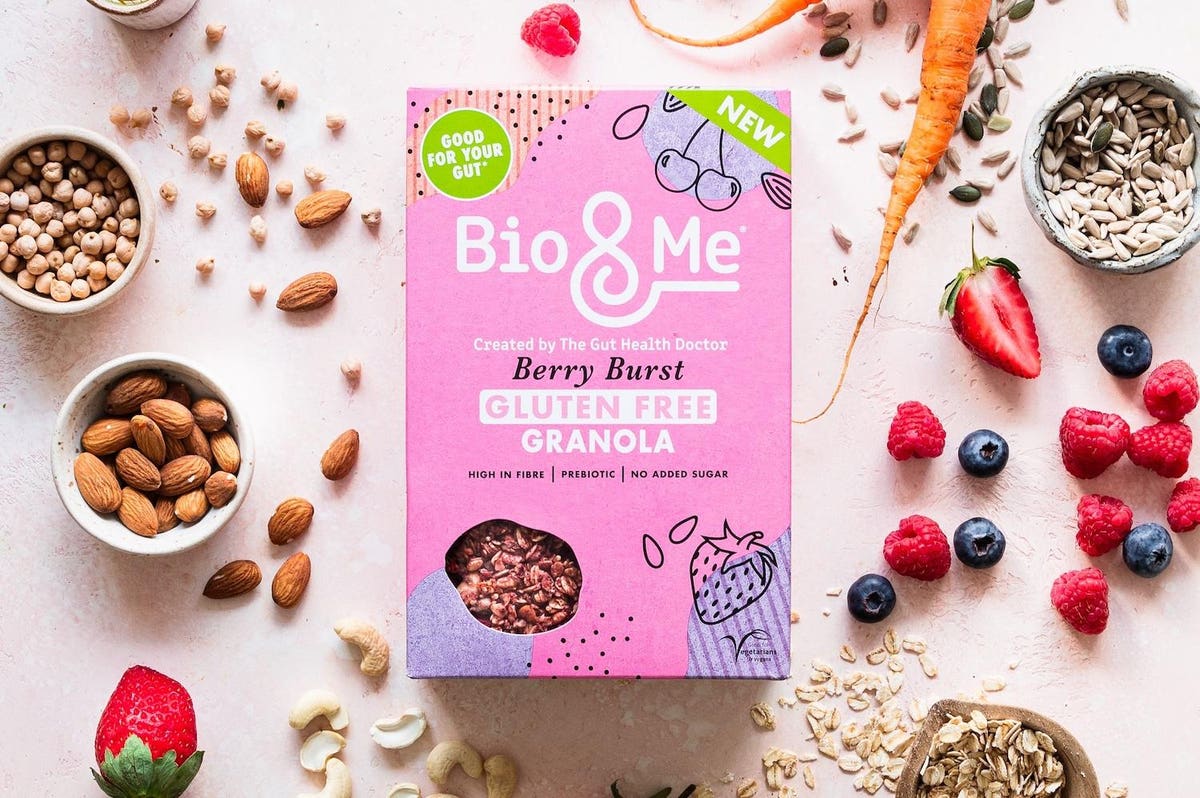 In January 2022, 620,000 people from over 220 countries and territories went vegan for a month, according to the official Veganuary organisation. It looks like that number will be higher for 2023 with the range and quality of vegan products continuing to expand, with new launches virtually every week. Here is a top selection of new plant-based foods ranging from breakfast staples to sweet treats that are worth adding to your vegan diet this month and beyond.

Dr Megan Rossi, the “The Gut Health Doctor,” says that despite granola being most people’s healthy breakfast choice, the reality is that not all granolas are healthy. So she created her own food brand, Bio&Me, founded in science so it is genuinely nutritious and is able to make a “good for your gut” health claim. Low sugar, vegan granola made from fifteen different types of natural plant-based foods and prebiotic fibre means it really does boost gut diversity. Recently launched in the Bio&Me granola range are two new flavors: Berry Burst with loads of freeze-dried strawberries, blackcurrants and cherries and Cashew and Almond containing twelve vegetables, wholegrains, fruits, legumes, nuts and seeds, high in fibre with no added sugar.

Another healthy granola is Rollagranola, also 100% vegan and gluten-free. Flavors include Organic and Nutty, Healthy Hazelnut, Almond & Pecan Crunch, and Absolutely Chocolate which is also high in zinc, an essential mineral crucial for our immune response. There are a Caveman granola if you follow a Paleo diet and the Cool Raspberry Granola is worth highlighting with macadamia nuts high in fibre and protein, and pumpkin seeds, ‘superfood’.

Tideford Organics has been making award-winning organic soups in Devon for over 25 years. Their mission has always been the same: to create high quality, simple, organic food, using the best possible ingredients. Natural, gluten-free ingredients you’d find in your own kitchen. In 2016, Tideford became a fully organic vegan brand. They’ve just launched a new and improved healthier version of its current vegan friendly Creamy Mushroom Soup, lowering the level of saturated fat and intensifying the deep mushroom flavour with the addition of a seven mushroom mixed blend.

Houmous is a staple for vegans and Ramona’s Heavenly Houmous, a creamy, tasty delight, is one of the best. Available in four delicious gluten free flavors: Original; Jalapeno; Red Pepper and Beetroot. The ideal companion to the brand’s Fabulous Falafels.

A collaboration between the popular London vegan restaurant Holy Carrot and the sauce brand Nojo, has produced an excellent range of vegan cooking sauces. Made in the UK and free from every conceivable “nasty,” the sauces use only the freshest, most natural ingredients. Yuzu sauce new to the range is made with naturally brewed tamari soy sauce, A grade maple syrup, yuzu juice and ginger. Great as a salad dressing, to dip sushi or gyoza dumplings, it also adds depth and rich flavour to sauces, stocks and stir fries. Nojo is all about sustainability; it’s a B-Corp Certified company using recyclable bottles and ingredients free from GMO, refined sugar, additives, artificial flavours and gluten.

Fudge Kitchen has been making artisan confectionery for nearly 40 years and have recently extended their range to include a variety of vegan products, some of which are made with their homemade nut butter. The vegan toffee fudge is excellent with the same superior quality, texture and taste you expect from Fudge Kitchen.

The plant-based nootropic* brand is on a mission to improve brain wellness and cognitive function. Their range of bars are are made with Norwegian black oats packed with essential brain nutrients including omega-3, phosphatidylserine and choline. Plus, vitamins, minerals, and gut-healthy prebiotic fibre, expertly formulated to support sharper focus and provide your brain with the daily hit of energy it might need during the cold winter months. Each bar is under 200 calories and they taste good too with a moist not dry texture.

For a decadent vegan treat, look no further than Melt, a chocolatier whose chocolate kitchens and shops are based in Notting Hill, London. The newly launched chocolate gianduja spread, made from 50% of hazelnut paste and 50% chocolate, is incredible. This is a posh, and perhaps healthier “nutella,” worth every penny of its £16.99 price tag.

After more than a decade popping PROPERCORN, and more recently launching PROPERCHIPS, PROPER Snacks has created vegan versions of three classic potato crisp flavors by launching Thai Chilli, Cheese and Onion and Flame Grilled Steak. In response to a growing demand for healthier crisps and in line with the rest of the portfolio, the PROPERCRISPS range is vegan, gluten-free and free from palm oil. And they contain 30% less fat and salt than leading ridged potato crisps and thanks to the addition of peas, is a source of fibre and protein.

This independent British company uses ethically farmed coconuts to create yoghurts and puds so thick, creamy and delicious that you wouldn’t believe they are made from a plant. Among their recent launches is creamy Raspberry Yog, fortified with Calcium and Vitamin D and made with live cultures and a hearty dose of magnesium & potassium to maintain blood pressure and healthy bones. And Red Berry Overnight Oats, a delicious blend of coconut yog, creamy oats and the berries, are a great way to start the day.