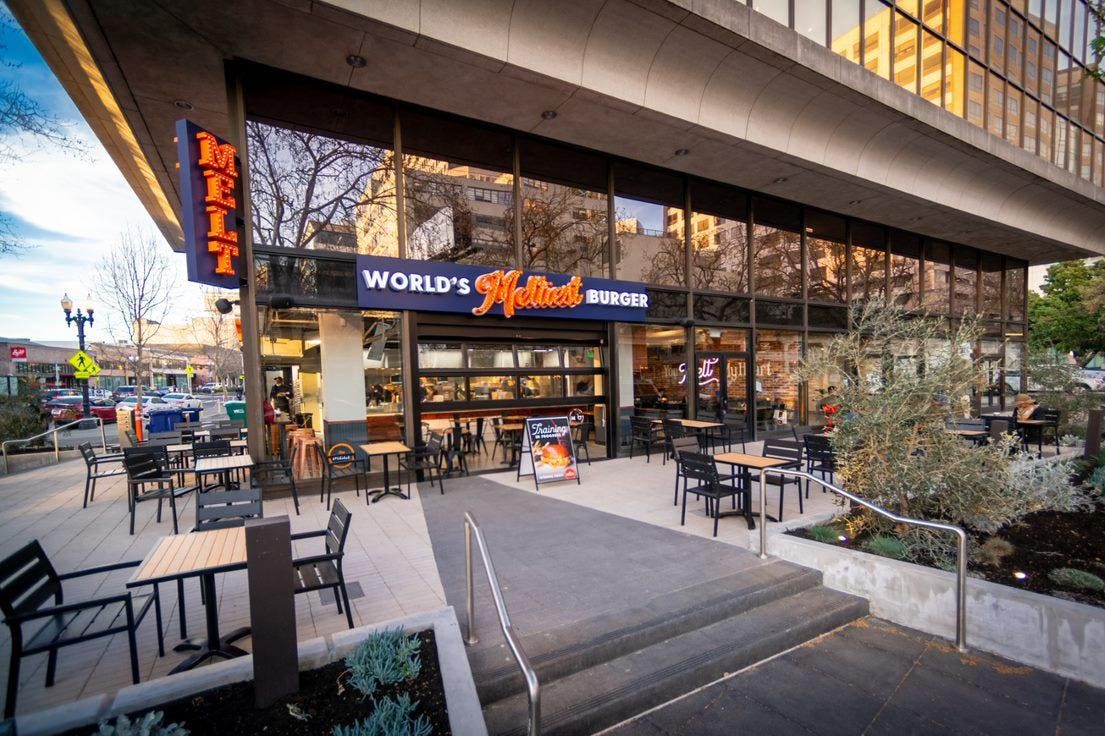 Call most restaurant chains “cheesy” and they might be offended. But call The Melt cheesy, a San Francisco based chain of 20 locations with 10 company-owned locations and 10 licensees, all based in California, and it might agree. It launched in 2011 but of late has been expanding at a steady pace.

Hence, it’s planning to add five to 10 company-owned locations and as many as 10 to 20 licensees in 2023, and again, all are pegged for California. It’s assembled a small group of investors who have been with the chain since its inception and contribute to its funding.

Ralph Bower, its CEO, who previously served as CEO of Pei Wei Asian Kitchen, a chain with 119 locations, says The Melt specializes in “cheese comfort food.” But he adds that “We now actually sell more burgers than grilled cheese sandwiches.”

He says its MeltBurger, which is grilled with Angus and Wagyu beef and blended with melted cheddar, is its best seller. But its menu includes mac n’ cheese, crispy fries, milkshakes, and for the calorie-minded, soups and salads. And it’s affordable since most people can dine for under $20 each.

Nor has the pandemic slowed it down. Bower says its average restaurant revenue has more than doubled since pre-pandemic times in 2019.

A burger and grilled cheese restaurant chain, The Melt, is growing at a steady pace, all in its home state of California, before it looks to expand in other states.

When Bower was named CEO in 2016, he surveyed several thousand of its customers on its database, and asked them, what does it need to change, and what does it need to keep? They replied that the food at The Melt was good but could be better, and they wanted to see more cheese on its products.

In response, Bower revised the recipe for its meltburger in 2017, which was influenced by the chopped cheese, known as a specialty item at many of New York City’s bodegas. It chopped up the meat of the burger, which allows the “cheese to get into every nook and cranny and makes the meat more tender,” Bower exclaims.

“The burger category has a lot of players, so you have to do something special to differentiate yourself,” he acknowledges.

But aren’t many Californians known for dining on salads and tofu, not cheeseburgers? Bower responds that when most people choose a restaurant, they start with “looking for something that tastes great.” He added “there’s room for nutritious options.”

When it first debuted, The Melt was mostly a lunch spot, but now that accounts for about 25% of its business. “Today our business is spread evenly through lunch, dinner and late nights with a big share of guests coming from after 8 p.m.” he explains. It has also become a late-night favorite with many outposts open as late as 2 a.m.

Asked if he’s exploring moving into another state, Bower replies that “We are definitely entertaining the idea of the next state to expand to. At the same time, we feel like California has a lot more communities that would welcome The Melt.”

Bower, a native of New Orleans, said too many restaurant chains fall into the trap of expanding too quickly “before they’re ready operationally.” Staying in California enables him to be a quick drive or short flight away from visiting every location. “We will grow outside of California but when we’re ready,” he declares.

He also emphasizes another reason to stay in California: he can more easily build a better team. He says many of his current managers were hired as hourly employees and are now earning $100,000 or more annually.

It also helps being financed by a group of private investors, who are looking for healthy returns, but have a long-term strategy, as contrasted with private equity, which invariably demands quick, short-term returns.

And growth is on the horizon. In 2023, it envisions opening about 5 to 10 company-owned stores and 10 to 20 licensed partner locations. “We’re on pace to double in size pretty quickly,” he says. Hence, it should arrive at 70 restaurants by 2026.

Licensee agreements have worked for The Melt. Bower says that with a traditional franchise model, “a franchisee owns and operates the business with a fee paid to the franchisor.” But licensees “may operate multiple brands and locations and compensates the licensor based on the volume of the licensor’s products only at an agreed upon percentage.”

He says many of its licensees operate ghost and virtual kitchens and “give us the opportunity to see where the growing demand is.” He pointed to a new outlet opening in Folsom, a suburb of Sacramento, based on licensee’s feedback.

Sounding like a management consultant, he is dedicated to instilling in its staff a “I love it here experience,” which is aimed at encouraging all of its guests to have this special experience based on its food, hospitality and cleanliness.

Asked to name the keys to its future success, without missing a beat, Bower replies, “100 percent, people, people, people. You can’t grow without great people and great leaders.” And then he adds “listening to your customers. If you listen to your guests and your team, you’ll be successful,” he said.

Chinese travelers are returning to Singapore, but a full recovery is not expected this year
The best spa hotels in Scotland for 2023
Guy Fieri Is Hosting A Free Super Bowl LVII Tailgate
John R. Tyson’s Settlement With Prosecutor Kicks Off What Could Be A Rough Year For Tyson Foods
How to book your first ski holiday: the 10 best ski resorts for beginners